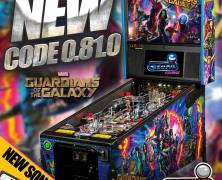 Please enjoy the highly anticipated Guardians of the Galaxy code update v0.81.0 which contains the two new songs “I Want You Back” by the Jackson 5 1969, and “Ain’t No Mountain High Enough” by Marvin Gaye and Tammi Terrell 1967! The code also features bug fixes and enhancements for a better game play experience! Thank you for […]

NEWS : TWO NEW SONGS BEING ADDED TO GUARDIANS OF THE GALAXY PINBALL

We heard you loud and clear! Our customers are loving the new Guardians of the Galaxy Pinball Machine, but we have heard that more original soundtrack music would be appreciated! We have been working very hard behind the scenes to get you more music! In the upcoming GOTG code update, you will find “I want […] 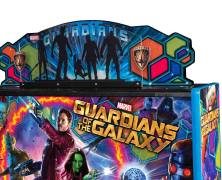 NEWS : STERN RELEASES ACCESSORIES FOR GUARDIANS OF THE GALAXY

JUST OFFICIALLY CONFIRMED!! “Hooked on a Feeling” 1973 – Blue Swede and “Cherry Bomb” 1976 – The Runaways will both be included in addition to the theatrical movie score for Guardians of the Galaxy Pinball! Pro Translite :

NEWS : DEAD FLIP REVEAL AND GAME PLAY OF GUARDIANS OF THE GALAXY

Jack Danger will reveal and have some game play on Stern’s latest release Guardians of the Galaxy. Tune in on Nov 20th, 6PM CST @ Twitch.tv/Dead_Flip

Stern announced today that it will be releasing Guardians of the Galaxy pinball machine.  The game is modeled after the movies bearing the same name.  Stern released photos and a short video of its three models LE, Prem, and Pro.  The game seems like it is packed with features such as magnets, spinners, kick backs, […]