Spooky Pinball on Facebook has released pics of its just released title and upcoming pinball machine Rick and Morty.  The game was designed by Scott Danesi.  Scott also designed Total Nuclear Annihilation with Spooky Pinball. Stay tuned for more info when it is announced. Pricing : $ 7,520 for Bloodsuckers LE $ 6,995 for Standard […] 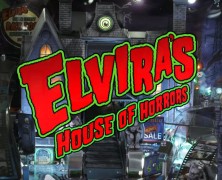 CHICAGO, IL – September 18, 2019 – Stern Pinball, Inc., a global lifestyle brand based on the iconic and outrageously fun modern American game of pinball, announced today the availability of a new line of pinball machines celebrating the iconic character, Elvira, Mistress of the Dark! The game was developed in collaboration with the Whizbang […]

The rumors were correct, Stern pinball released the home version of Star Wars pinball today.  The artwork and shots actually look pretty good especially for a home pin.  As with any home pin, the display is smaller and the mechanical features in the game are a lot less than the average pinball machine. The price […]