Posted by pinballsupernova on January 10, 2017 in News and Videos About Pinball | Leave a comment 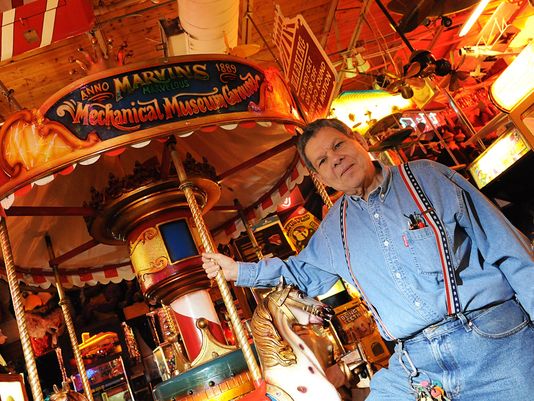 Marvin Yagoda, the owner and operator of Marvin’s Marvelous Mechanical Museum has died today at the age of 78.  Marvin opened the museum back in the 90’s displaying all his coin op arcade games for the world to see and play.  Marvin had a great collection of arcade games, many dating back to the early ages of coin op.  I first heard of Marvin and his collection from listening to Clay Harrell’s podcasts years ago.  I did not know Marvin, but listening to the stories and seeing the many interviews with him, he seemed like a person with a wealth of knowledge and a truly nice guy.  Marvin will be missed.

Read some of the stories about Marvin and his collection below :

Marvin Yagoda, the beloved founder of Marvin’s Marvelous Mechanical Museum in Farmington Hills, died on Sunday, according to a post made on the business’ Facebook page. He was 78 years old.

Yagoda, who first opened Marvelous Marvin’s in 1990, has been collecting vintage coin-operated arcade games and any other unusual rarities that caught his eye since 1960, and he has continued to add to the Mechanical Museum’s collection throughout the years.

“I decided to open the museum because I had so much stuff in my house,” Yagoda told The Oakland Press in a 2010 interview. “That, and my wife told me I had to do something with it.”

The 5,500-square-foot facility on Orchard Lake Road at 14 Mile houses everything from historical penny-games to the latest in arcade technology. Listed in the World Almanac’s 100 most unusual museums in the U.S., Marvin’s has become a much-loved and unique staple of Oakland County.

Many people on Facebook expressed sadness and heartfelt condolences for the family after hearing the news of Yagoda’s death.

Read the entire story below :
http://www.theoaklandpress.com/general-news/20170109/marvin-yagoda-founder-of-marvins-marvelous-mechanical-museum-in-farmington-hills-dies

Marvin Yagoda, founder of Marvelous Marvin’s Mechanical Museum, died Sunday evening, according to WDIV. He was 78.

The eccentric businessman created the Farmington Hills marvel, having started collecting items upon his graduation from the University of Michigan.

According to a 2003 Metro Times interview with his son Jeremy, Yagoda’s “insanity” was to blame for the collection of creepy-looking carnival machines that you might expect to see in the film Big — everything from ancient pinball machines, kiddie rides, ’80s thriving arcade games, and stranger wonders such as P.T. Barnum’s Cardiff Giant and a once-working electric chair in which 30 people died. Those peculiar items reside inside the 5,500-square-f00t museum.
Read the entire story below:
http://www.metrotimes.com/catch-all/archives/2017/01/09/marvin-yagoda-of-marvelous-marvins-mechanical-museum-has-died#.WHQbjF4CqYE.facebook