Posted by pinballsupernova on August 22, 2015 in Podcast Update | Leave a comment

Dan from TiltTopper has created a new Indiana Jones topper for your Stern Indiana Jones pinball machine.  Dan has created some great toppers including two Attack and Revenge From Mars, Medieval Madness, and also Metallica all which I currently own.

This is my Indiana Jones pinball topper. It was designed for anyone’s favorite IJ pinball machine. The topper features a molded fertility god, 3d Indiana Jones title and molded translucent flaming torches. This topper has two levels and has seven different LED lighting effects. It also features sound activated lighting that flashes to the sound of the music in the pinball game.

This topper was a labor of love for me. Indy has been a big favorite of mine since I was a kid. I really spent a long time developing the design for this one. There were 3 prototypes I had developed over several months, each time re-working my design, molds and lighting until I was completely satisfied.

Due to the complexity of this topper along with the custom molds, I will be producing 1 run of these toppers only. I will be taking orders for 3 weeks with the run beginning the week of Sept. 20th. Feel free to PM or email me with any questions. Thanks:) -Dan 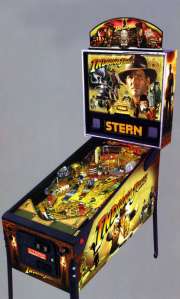