Posted by pinballsupernova on January 6, 2015 in Mods | Leave a comment

“We didn’t think it was possible, but The Walking Dead machine keeps getting better and better with the addition of our custom-developed Walking Dead accessories,” said Gary Stern, Chairman and CEO of Stern Pinball. “We are thrilled to partner with Mezel Mods to bring fans a new zombie apocalypse experience.”

The Walking Dead prison tower is available now through the Stern Store and select authorized Stern distributors and dealers.

About Mezel Mods
Mezel Mods is a manufacturer and retailer of accessories for new and old pinball machines. The company uses 3D printing technology extensively giving it the advantage of rapid product development and inexpensive, low volume manufacturing. Headquartered in Albuquerque, New Mexico, the company sells online around the globe and is operated by the company’s CEO, Kristin Browning-Mezel. 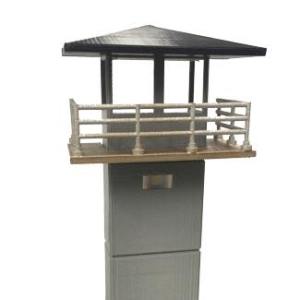